Skip to content
Posted on April 23, 2019 by paulsedra Posted in Uncategorized 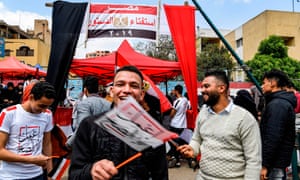 Supporters of President Abdel Fatah al-Sisi have claimed victory after almost 90% of Egyptian voters backed sweeping constitutional changes that could result in him ruling until 2030. Election officials claimed 88.8% of voters had confirmed the changes, with a turnout of 44%.

from Pocket http://bit.ly/2IBtcMt
via IFTTT