Skip to content
Posted on May 22, 2019 by paulsedra Posted in Uncategorized 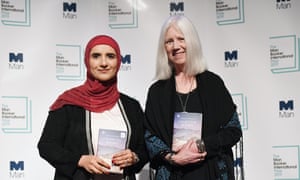 Jokha Alharthi, the first female Omani novelist to be translated into English, has won the Man Booker International prize for her novel Celestial Bodies. Alharthi, the £50,000 award’s first winner to write in Arabic, shares the prize equally with her translator, American academic Marilyn Booth.

from Pocket http://bit.ly/2VTKw6G
via IFTTT