Skip to content
Posted on October 5, 2018 by paulsedra Posted in Uncategorized 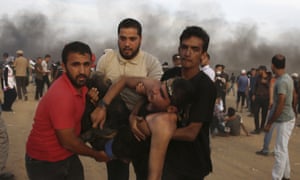 Israeli forces have killed three Palestinians including a child at a border protest in Gaza, Palestinian officials have said. No Israelis were wounded, but the army said it was defending itself against members of the crowd who were throwing grenades and explosives at its soldiers.

from Pocket https://ift.tt/2BYzpho
via IFTTT