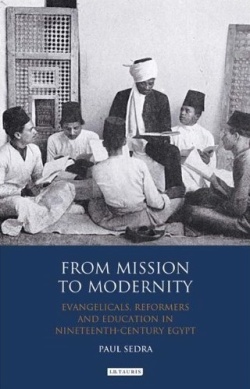 ‘With its clear writing, broad-ranging analysis, and rich insight, From Mission to Modernity is both an impressive achievement and a pleasure to read. Sedra sweeps across an eventful nineteenth century to present what is at once an intellectual history, a history of education, and a history of religion and politics. With this book, Sedra makes a major contribution to the study of nineteenth-century Egypt.’

‘In describing nearly a century of interactions between Protestant missionaries and Egypt’s indigenous Coptic community, Paul Sedra’s new book deepens our understanding of the subtle ways missionization helped transform Egyptian society through processes of “cultural conversion” even in the absence of significant religious conversion. Sedra shows how international relations, domestic politics, specific educational strategies, and the widening gap between wealthy Coptic landowners and the Church hierarchy served to inculcate a “modern Coptic subjectivity”.’

‘This book offers a compelling story of the tensions of colonialism in the intertwined realms of education and religion. As well as being a delightful read, it represents a useful contribution to Egypt studies and Middle Eastern studies with fascinating new data and fresh interpretations of a critical aspect of modernity studies – the relationship between text and power. Written with an anthropological sensibility, From Mission to Modernity captures the multiple and often conflicting ways that different social groups in 19th century Egypt attempted to gain power and reorder society by privileging textual authority over orality, and abstract uniform moral codes over multiple, embedded moralities. Sedra has opened up new areas of research on the 19th century Middle East.’

Jadaliyya: What made you write this book?

Paul Sedra: As an undergraduate, I had a strong interest in contemporary relations between Coptic Christians and Muslims in Egypt, and decided to write a senior thesis on the topic. The only problem was that the literature, particularly that in English, was terribly underdeveloped. Generally speaking, there was almost no literature in English on the modern history of the Coptic community. Much was made in the existing literature of the impact of missionaries on the community in the nineteenth century, but this seemed to make little sense at the time, because the missionaries mentioned—an Anglican contingent sent to Egypt in the 1820s—had enjoyed almost no success in making converts. When I took up Master’s studies in the United Kingdom, I thought, on a lark, that I might try to locate the archives of the Church Missionary Society (CMS), which had dispatched the missionaries of whom I had read. I was amazed when I came across the CMS records of the Egypt missionaries, because they consisted of hundreds of letters that I had never seen referenced in histories of the Coptic community or of Egypt.

As I made my way through the missionary correspondence and journals, their omission from the historiography of modern Egypt came to seem shocking, because they chronicled a wide range of contacts between the “reformers” of Muhammad Ali Pasha’s administration—often credited with having “modernized” Egypt in the early nineteenth century—and the missionaries. Initially, I was puzzled by the existence of these contacts: What would the educational pioneer Rifa‘a al-Tahtawi, for instance, have wanted from an evangelical Christian missionary? Upon comparing missionary publications with those of Muhammad Ali’s state, it became apparent that these evangelical Christians were unwitting participants in the Pasha’s “modernizing” project, insofar as they were willing to exchange information with local reformers about their practices, most notably in the educational sphere.

J: What particular topics, issues, and literatures does it address?

PS: To give just one example of how these missionary writings would influence the historiography of modern Egypt: Timothy Mitchell’s Colonising Egypt draws at length on the example of the Lancaster system of education when describing the rise of the modern Egyptian state, and the forms of governmentality and subjectivity that this state fostered. But Mitchell has little to say about how Lancaster schools actually operated on Egyptian soil, or how they were adapted to an Egyptian context. The missionary documents reveal in vivid fashion how the Lancaster system was employed by European evangelicals among Egyptian students, but perhaps more importantly, how Ottoman-Egyptian officials observed the system at work and then selectively adapted parts of the system for use in the emergent state school apparatus. So instead of a story about the transplantation of European modernity into the Middle East, this becomes a story about selective appropriation and adaptation—the emergence of an Egyptian modernity, if you will.

Of course, though, the story cannot end there, because the question invariably arises: Where are the students? One need hardly explain that theirs is the hardest part of the story to tell, because their response to “modern education” can seldom be read from existing archives in a straightforward fashion. Textbooks and manuals speak volumes about the educationalists and pedagogues who created them, but say very little about their intended audience, the students, or the students’ parents. I strove to get at part of the story of student reception of modern education through accounts of conflict over schooling and, most interestingly, of school failures, but there is a pressing need for further research on this question.

J: How does this work connect to and/or depart from your previous research and writing?

PS: This book was developed from my doctoral dissertation. As noted above, my concern with Egyptian educational history emerged from a narrower concern, as an undergraduate and Master’s student, with the history of the Coptic Christian community in Egypt. In retrospect, I would say that one of the most important points that this transition underscored is that one simply cannot view the history of the Coptic community as sui generis, as “exceptional,” or as separate from that of Egyptian Muslims. At a glance, this point would seem to have a nationalist air—“Copts and Muslims united”—but nothing is further from my intention. Rather, I am simply rejecting the specious, quasi-racial narratives of Coptic exceptionalism that have pointed to the community as the “modern sons of the pharaohs” or a “long-suffering minority.” There are several reasons to reject this exceptionalism, perhaps most notably the fact that cleavages within the community—along class lines, for instance—are far greater than the sectarian cleavage that separates Copts from Muslims.

The corollary to this point, in my view, is that one cannot write Egyptian history without reference to the Coptic community—and yet historians of Egypt have consistently, and quite alarmingly, relegated the Copts to their footnotes, if they have considered them worthy of mention at all. I hope my book demonstrates, by way of example, that one simply cannot grasp the history of education in modern Egypt without examining the educational projects that both the Coptic Church and the Coptic community developed during the nineteenth century.

J: Who do you hope will read this book, and what sort of impact would you like it to have?

PS: As the book has an eclectic range of concerns, I would hope it finds an equally eclectic audience! It appears at the crest of a wave of interest in Western missionary activity to the Middle East, and joins works in this area by scholars like Heather Sharkey, Ussama Makdisi, and Marwa Elshakry. Further, it is one of the few book-length explorations of Egyptian educational history to have appeared since J. Heyworth-Dunne’s Introduction to the subject, published in 1939. Finally, as described above, it engages with the modern Coptic community in a way that only my colleagues Febe Armanios, Nelly van Doorn-Harder, and Anthony Shenoda have achieved through their scholarship. If the book is ultimately seen, by having brought these eclectic concerns together, to have told a part of the story of Egyptian modernity, I would be delighted.

Excerpt from From Mission to Modernity:

The cardinal Christian values of love, faith, and charity figure prominently in the sermons of nineteenth-century evangelical missionaries. However, as one ventures beyond the rhetoric, and in fact peruses the journals, plans, and reports in which such missionaries discussed the trials and tribulations they faced from day to day in the field, one comes to grasp the distinct plan of action that “charity” toward the “heathen” demanded. According to the missionaries, the Lord had set forth in the Scriptures how Christians were to lead their lives in specific, substantive terms. That Scriptural “order” mandated the pursuit of industry and discipline.

Such an interpretation of the Scriptures was rooted, to a great degree, in the missionaries’ social origins. They hailed from humble backgrounds, and had embarked upon careers in mission given the material support mission societies could offer at the time. Once in the field, they came to conceive of their efforts as “rugged individualism”—came to believe that they had earned their relative prosperity through industry and discipline, by adhering to the Scriptural “order.”

That “order” was of exceptional relevance to Mediterranean missionaries, for they were to preach in the field in which the Savior himself had preached centuries prior. To restore industry and discipline to the Christian communities of the Middle East was, in their eyes, to revive the Scriptural “order” among the pioneers of that “order.” In nineteenth-century narratives of Western and Christian development, the Copts of Egypt held a particularly exalted role as the oldest Christians in the world, Christians who had survived the Arab invasion, endured persecution at the hands of Muslims, but resisted the pressure to convert. As the evangelicals came to perceive their Coptic “brethren,” despite their grand legacy, as morally “corrupt”—engaged, according to mission reports, in rampant cursing, lying, hypocrisy, and diffidence, to a degree unmatched by Muslims—the urgency of “colonizing” the Church, community, and mind of the Copt only grew.

Upon entering the Coptic church, missionaries were immediately struck by the darkness therein—a darkness that reflected, in their eyes, the poor state of Coptic spirituality. They could scarcely fathom the lack of pews in the church, particularly given the length of the services, and mocked the staffs upon which parishioners could lean for support. [Missionary William] Jowett memorably remarked that, upon his visit to the Cathedral, he was “squeezed into that part where the Patriarch and the Priests stood; and I could not help feeling how inevitable contagion would be in such a situation, if Plague were in Cairo.” His visits to bishops throughout Egypt were marked by just such consternation, for he frequently discovered animals occupying rooms immediately adjacent to churches in the episcopal residences. At both Isna and Akhmim Jowett was forced to traverse stables of asses in order to meet with a bishop. For Jowett, such arrangements were odd indeed, for the division of space was not, in his eyes, suitable. To draw upon that last case, an episcopal residence just could not contain a stable, for the existence of a stable in the residence scarcely spoke to the spiritual authority of the bishop therein.

[Excerpted from Paul Sedra, From Mission to Modernity: Evangelicals, Reformers and Education in Nineteenth Century Egypt. @ 2011 Paul Sedra. Reprinted by permission of the author.]