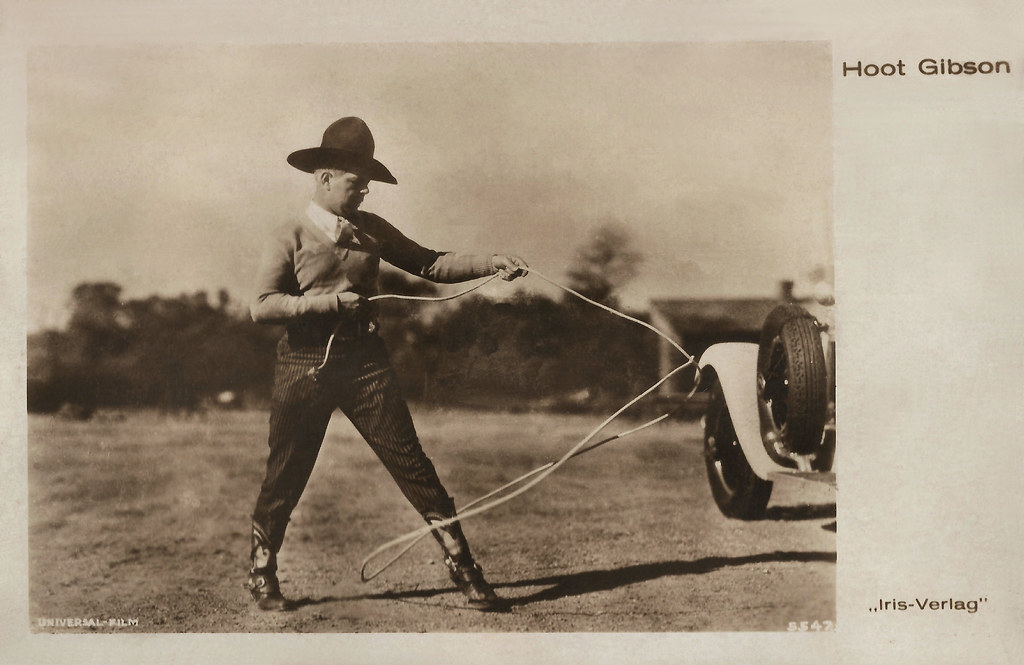 Hoot Gibson (1892-1962) was a rodeo champion and pioneering cowboy star of silent Westerns. With his easy combination of light, breezy, boyish charm comedy and riding abilities, Hoot filled a gap between the austere William S. Hart and the flamboyant Tom Mix and appealed both to adults (especially women) and kids. During the 1920s, he was one of the most popular children’s matinée heroes, ranking second only to Mix, and one of Universal’s top paid stars. In his real life, however, he had an expensive love for fast cars, motorcycles and airplanes and lead a rather painful rags-to-riches-and-back-to-rags career.

Hoot Gibson was born Edmund Richard Gibson in 1892, in Tekamah, Nebraska. As a child he grew up ‘horse crazy’ and received his first pony at the age of two and a half. His family moved to California when he was seven. At age 13 the adventurous youth ran away from home and joined a circus for a time. At B-Westerns.com, Hoot recalled: "First job I got was on the Postal Telegraph. I was then 15. I rode that for about three months and liked it fairly well. I got a job at the Owl Drug Co., delivering drugs and packages to the different homes throughout southern California or that part of Los Angeles. That is where I got the name of Hoot. It came from Owl and later the boys started calling me Hoot Owl, then it got down to Hoot and Hoot has stuck with me ever since." Later work included punching cows in both Wyoming and Colorado. While working as a horse wrangler, Hoot developed a strong, active interest in the rodeo scene. In 1907 he signed a four-year contract with the Dick Stanley-Bud Atkinson Wild West Show, which toured throughout the US and later Australia. By 1910 Hoot started his film career with the Selig Polyscope Co. as one of the industry’s first stuntmen. He was paid $2.50 for performing stunts, training horses and doubling for Selig stars. Director Francis Boggs was looking for experienced cowboys and stunt doubles to appear in his Western short Pride of the Range (Francis Boggs, 1910) starring Tom Mix. Gibson and pal Art Acord did riding and stunting jobs for the film. Gibson made a second film for Boggs The New Superintendent (Francis Boggs, 1911) with Herbert Rawlinson. Hoot lost a solid Hollywood contact in Boggs, however, when the director and his working partner, producer William Nicholas Selig, were both shot in October, 1911, by a mentally disturbed employee. Selig was injured, but Boggs was killed. Gibson also found stunt work in such prolific Western shorts as The Two Brothers (David Wark Griffith, 1910), starring Henry Walthall, and His Only Son (Jack Conway, 1912). Acting for Gibson was then a minor sideline, and Hoot continued to forge a name for himself on the rodeo circuit with his pal Art Acord. In 1912, at age 20, he won the title ‘All-Around Champion Cowboy’ at the famed annual Pendleton (Oregon) Round-Up. He also won the steer-roping World Championship at the Calgary Stampede. While on the circuit, he met fellow rodeo rider Rose August ‘Helen’ Wenger. They eventually married and she took on the marquee name of Helen Gibson. She even found film stunt work herself and eventually was chosen to replace Helen Holmes as star of the popular movie serial The Hazards of Helen (J. Gunnis Davis a.o., 1914) during mid-filming. Hoot himself had the job doubling Helen Holmes and doing the stunts from horses to trains in the Universal cliffhanger. Hoot picked up new connections in the film industry with Western star Harry Carey and director John Ford. With Ford, Gibson developed a lasting friendship and working relationship. Gibson gained some momentum as a secondary player in a few of their films, including Cheyenne’s Pal (1917), Straight Shooting (1917), The Secret Man (1917) and A Marked Man (1917). With the outbreak of World War I, however, Gibson’s film career was put on hold. He joined the US Army, eventually attaining the the rank of sergeant while serving with the Tank Corps, and was honorably discharged in 1919. He returned immediately to Universal and was able to restart his career.

At Universal, Hoot Gibson quickly worked his way up to co-star status in a series of short Westerns, often directed by John Ford. The two-reelers usually co-starred either Pete Morrison or Hoot’s wife Helen, or sometimes both. Films such as The Fighting Brothers (John Ford, 1919), The Black Horse Bandit (Harry Harvey, 1919), Rustlers (John Ford, 1919), Gun Law (John Ford, 1919), The Gun Packer (John Ford, 1919) and By Indian Post (John Ford, 1919) eventually led to his solo starring success. During this prolific period, he was also directed by George Holt in The Trail of the Holdup Man (1919), Phil Rosen in The Sheriff’s Oath (1920) and Lee Kohlmar in The Wild Wild West (1921). Around this time, Hoot and Helen divorced. In the early 1920s, Hoot went on to marry another Helen, vaudeville actress Helen Johnson. They had one child, Lois Charlotte Gibson, born in 1923. The couple divorced in 1927. By 1921, the demand for cowboy pictures was so great, Gibson began receiving offers for leading roles. Superstardom came with the Western Action (John Ford, 1921), which was taken from The Three Godfathers story. It starred Hoot, Francis Ford and J. Farrell MacDonald as a trio of outlaws on the lam who find a baby. Action propelled Gibson to fame and fortune and he remained at Universal for the next 10 years. Boyd Magers and Bill Russell at B-Westerns.com: "What made Gibson so popular over the years? He was not what one might call handsome, being a little on the homely side, nor did he cut a dashing figure on horseback, although he could ride like a demon. Neither was he a polished scrapper of the Bob Steele school of fisticuffs, but could mix it up with the best of them. He mostly never wore a gun in the standard cowboy hero way, instead shoved it in his belt or boot. So what made this cowboy hero one of the greats? You could call it character, a certain boyish charm, or simply a naturalness that appealed to the western fan. He had a contagious smile, and while most heroes had a sidekick who provided the comedy routine, Hoot was his own best sidekick." During his Universal years, Gibson starred in such classics as the exciting The Ridin’ Kid from Powder River (Edward Sedgwick, 1924) , the humorous Chip of the Flying U (Lynn Reynolds, 1926) and the more serious and dramatic The Flaming Frontier (Edward Sedgwick, 1926) with Dustin Farnum, he would occasionally step out of his Western roles for a non-Western feature. By 1925 Hoot Gibson was making approximately $14,500 a week and spending it about as fast as he was making it.

Hoot Gibson successfully made the transition to talkies and, in 1930, married popular Jazz-era actress Sally Eilers, a third party to his previous divorce. The couple made three features together: The Long, Long Trail (Arthur Rosson, 1929), Trigger Tricks (B. Reeves Eason, 1930) and Clearing the Range (Otto Brower, 1931). When she found celluloid success on her own with the Oscar-winning Bad Girl (Frank Borzage, 1931), Sally decided to split from Hoot professionally and personally. They divorced in 1933. Hoot lost his Universal contract in 1930, which signified the start of his decline. During the early 1930s, he secured contracts with the Poverty Row outfits Allied Pictures and First Division Pictures, but the quality of his films suffered. Hoot had already begun to feature race cars and airplanes in his films such as The Flyin’ Cowboy (B. Reeves Eason, 1928) and The Winged Horseman (B. Reeves Eason, Arthur Rosson, 1929). Gary Brumburgh at IMDb: "Airplanes in particular became a large, expensive passion of his. In 1933 he crashed his biplane during a National Air Race in Los Angeles, which had pitted him against another cowboy star, Ken Maynard. Fortunately, he survived his injuries." With the advent of talking films, singing cowboys such as Gene Autry and Roy Rogers were becoming the new rage, and both Hoot and Tom Mix felt the kick. Yet he managed a couple of comebacks by pairing up with others stars. He joined old silent film teammate Harry Carey and ‘Guinn Big Boy Williams’ in the ‘Three Mesquiteers’ Western Powdersmoke Range (Wallace Fox, 1935), and was billed second to Ray Corrigan in the Republic serial The Painted Stallion (Alan James, Ray Taylor, William Witney, 1937). Gary Brumburgh: "Hoot left films and toured with the Robbins Brothers and Russell Brothers circuses during 1938 and 1939 before retiring from show business altogether. His multiple divorces and reckless spending habits had taken their toll on his finances. For a time he found work in real estate before Monogram Pictures offered the stocky-framed actor a chance to return in 1943. Hoot teamed up with cowboy star Ken Maynard in the popular ‘Trail Blazers’ series, and the duo were later joined by Bob Steele. Chief Thundercloud replaced a difficult Maynard on a couple of the films, but by the end of the series Gibson and Steele were riding alone together." The nearly dozen films in the series began with Wild Horse Stampede (Alan James, 1943) and ended with Trigger Law (Vernon Keays, 1944), the latter being his last hurrah in films. Hoot then returned to real estate. By the time he appeared as a surprise guest on the popular sitcom I Married Joan (1952) starring Joan Davis, his Western features of the 1930s and 1940s, as well as those of Maynard, Steele and others were a large staple of films seen by a TV audience that couldn’t get enough Western fare. He did a favour for old friend John Ford by appearing in a cameo role in the director’s The Horse Soldiers (John Ford, 1959), starring John Wayne and William Holden. His last movie spotting was a guest cameo in the ‘Rat Pack’ film Ocean’s Eleven (Lewis Milestone, 1960). Hoot married a fourth and final time in 1942, to 22 year old yodeler and actress Dorothea Dunstan. This marriage took hold and lasted for 20 years until his death. By the 1960s Gibson was on the verge of financial collapse after a series of bad investments. Gary Brumburgh: "Diagnosed with cancer in 1960, rising medical costs forced him to find any and all work available. He was relegated at one point to becoming a greeter at a Las Vegas casino and, for a period, worked at carnivals. It was an unhappy end for a cowboy who brought so much excitement and entertainment to children and adults alike." In 1962, Hoot Gibson died of cancer at the Motion Picture Country Home in Woodland Hills, California, just a couple of weeks after his 70th birthday. He was interred in the Inglewood Park Cemetery in Inglewood, California.