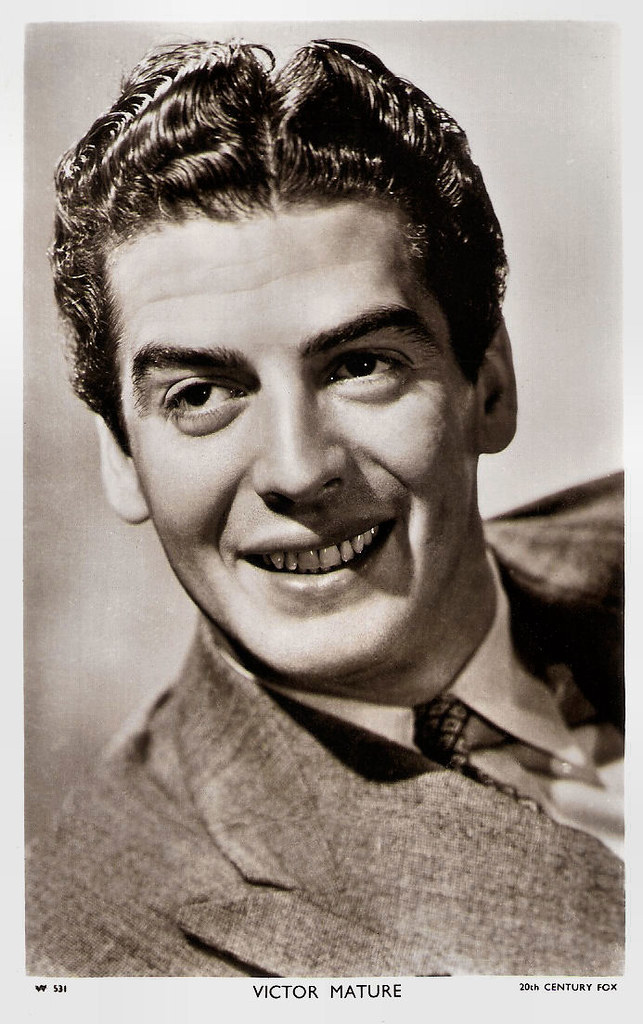 Hunky American leading man Victor Mature (1913-1999) starred in Biblical epics like Samson and Delilah (1949), and The Robe (1953), and was known for his dark good looks and mega-watt smile. He also appeared in the classics One Million B.C. (1940), My Darling Clementine (1946), Kiss of Death (1947), and in a large number of musicals opposite such stars as Rita Hayworth and Betty Grable.

Victor John Mature was born in Louisville, Kentucky, in 1913. His father, cutlery sharpener Marcellus George (Gelindo) Mature, was Italian (from Pinzolo, Trentino), and his mother, Clara P. (Ackley) was of Swiss-German and German descent. Mature worked as a teenager with his father as a salesman for butcher supplies. He briefly sold candy and operated a restaurant before moving to California. Hoping to become an actor, he studied at the Pasadena Playhouse in California. For three years, he lived in a tent in the backyard of the mother of a fellow student, Catherine Lewis. He was spotted by an agent for Hal Roach while acting in a production of To Quito and Back by Ben Hecht at the Pasadena Playhouse, Mature signed a seven-year contract with Roach in September 1939. He auditioned for Gone with the Wind (Victor Fleming, 1939) for the role ultimately played by his fellow Playhouse student, George Reeves. Roach cast Mature in a small role in the comedy The Housekeeper’s Daughter (Hal Roach, 1939), then gave him his first leading role, as a fur-clad caveman in One Million B.C. (Hal Roach Jr., Hal Roach, 1940) opposite Carole Landis. The film was highly publicised and it raised Mature’s profile. Hedda Hopper called him "a sort of miniature Johnny Weissmuller". Roach then put him in a swashbuckler set during the War of 1812, Captain Caution (Richard Wallace, 1940). As Hal Roach only made a handful of films every year, he loaned out Mature’s services to RKO, who used him as a leading man in the Anna Neagle–Herbert Wilcox musical, No, No, Nanette (1940). The studio people were so pleased with his performance, they bought an option to take over half of Mature’s contract with Hal Roach, enabling them to draw on his services for two films a year over three years. Mature also appeared in the Broadway musical Lady in the Dark (1941) with a book by Moss Hart and songs from Ira Gershwin and Kurt Weill. Mature played Randy Curtis, a film star boyfriend of the show’s protagonist, magazine editor Liza Elliott (Gertrude Lawrence). In the musical his character was described as ‘What a beautiful hunk of man!’ The musical was a smash hit, making a star of Danny Kaye and Macdonald Carey, and causing fresh appreciation for Mature’s talents. His performance was well received and the description "Beautiful Hunk of Man" would be frequently used to describe Mature throughout his career. Fox bought out the four years remaining on Mature’s contract with Hal Roach and he appeared in such popular musicals as My Gal Sal (Irving Cummings, 1942) with Rita Hayworth, and Footlight Serenade (Gregory Ratoff, 1942) with Betty Grable. After achieving acclaim with these films, he served in the Coast Guard in World War II. This meant that when Paramount filmed Lady in the Dark, Mature was unable to reprise his stage role.

Vitcor Mature was honorably discharged from the Coast Guard in November 1945 and he resumed his acting career. Soon, he became one of Hollywood’s busiest and most popular actors, though he was rarely given the critical respect he often deserved. His roles in John Ford’s My Darling Clementine (1946) playing Doc Holliday opposite Henry Fonda’s Wyatt Earp, and in Henry Hathaway’s Kiss of Death (1947) were among his finest work. Mature’s career received a massive lift when borrowed by Cecil B. DeMille at Paramount to play the lead in the $3.5 million biblical spectacular Samson and Delilah (1949) opposite Hedy Lamarr. Despite his physique and his tough guy persona, Mature was a man of many fears and phobias. During filming, Mature was frightened by a number of the animals and mechanical props used in the production, including the lions, the wind machine, the swords and even the water. This infuriated the director, DeMille, who bellowed through his megaphone at the assembled cast and crew: "I have met a few men in my time. Some have been afraid of heights, some have been afraid of water, some have been afraid of fire, some have been afraid of closed spaces. Some have even been afraid of open spaces — or themselves. But in all my 35 years of picture-making experience, Mr. Mature, I have not until now met a man who was 100 percent yellow." Groucho Marx famously said he would not go to see the film because "the leading man’s tits are bigger than the leading lady’s". However, Samson and Delilah earned over $12 million during its original run, making it the most popular Hollywood movie of the 1940s. It ushered in a cycle of spectacles set in the Ancient World. Mature starred in such epics as Androcles and the Lion (Chester Erskine, 1952) opposite Jean Simmons, Demetrius and the Gladiators (Delmer Daves, 1954) with Susan Hayward, and The Egyptian (Michael Curtiz, 1954) with Jean Simmons and Gene Tierney. Jim Beaver at IMDb: "Never an energetic actor nor one of great artistic pretensions, he nevertheless continued as a Hollywood stalwart both in programme and in more prominent films like The Robe (1953)."

More interested in golf than acting, Victor Mature’s appearances diminished through the late 1950s and 1960s. Applying for membership in the swank Los Angeles Country Club at the height of his fame, Mature was turned down and told that the golfing facility did not accept actors as members. His response: "I’m not an actor – and I’ve got 64 films to prove it!" Mature was reunited with producer Irwin Allen for The Big Circus (Joseph M. Newman, 1959) with Red Buttons. In Italy, he starred in the Peplum Annibale/Hannibal (Carlo Ludovico Bragaglia, Edgar G. Ulmer, 1959), with Gabriele Ferzetti and Rita Gam. In Italy, he also appeared in I tartari/The Tartars (Richard Thorpe, 1961) with Orson Welles. Mature then retired from acting. Five years later, he made a stunning comeback in the hilarious Italian-British comedy Caccia alla volpe/After the Fox (Vittorio de Sica, 1966), based on a play by Neil Simon. He starred opposite Peter Sellers and Britt Ekland as Tony Powell, an aging American actor who is living off his reputation from his earlier body of work. In a similar vein, he played a giant, The Big Victor, in The Monkees film Head (Bob Rafelson, 1968). Golf eventually took over his activities. Wikipedia quotes him about his acting career: "Actually, I am a golfer. That is my real occupation. I never was an actor. Ask anybody, particularly the critics." His last feature film appearance was a cameo as a millionaire in Firepower (Michael Winner, 1979), starring Sophia Loren and James Coburn, and, after a cameo as Samson’s father in the TV remake Samson and Delilah (Lee Philips, 1984), he retired for good. Rumors occasionally surfaced of another comeback, but none came to fruition. Victor Mature died of cancer at his Rancho Santa Fe, California, home in 1999. Mature was married five times. His wives were actress Frances Charles (1938–1940), Martha Stephenson Kemp (1941–1943), Dorothy Stanford Berry (1948–1955), Adrienne Urwick (1959–1969) and Loretta Sebena (1974 until his death). With Sebena, he had his only child, daughter Victoria, who is now an opera singer as was her mother.