Skip to content
Posted on February 25, 2020 by paulsedra Posted in Uncategorized 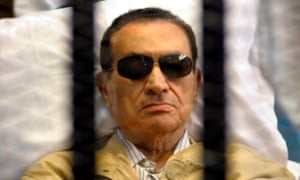 Egypt’s ousted former president Hosni Mubarak has died at the age of 91, state television said on Tuesday, weeks after undergoing surgery. Mubarak ruled Egypt for 30 years until he was ousted following mass protests against his rule in 2011, during the Arab spring.

from Pocket https://ift.tt/3c4NpG1
via IFTTT